Food is one of the main resources in the game. Food is used to feed your soldiers, so having a greater food production will allow you to hold more troops, hence allowing you to have more powerful attacks and also have a better defense for incoming attacks. In order to maximize your food production, you may go directly to the list of factors affecting food productivity or keep reading this article, which will give you a better underrating about the terms and options that are involved and have influence on food in the game.

Each soldier in any castle of outpost requires food to survive (this excludes mead soldiers that doesn't need food to survive, but to produce mead for them you need food). This value varies for each soldier, and it is usually 2-5 food units per hour.

Here is the formula:

When your "Food Usage" per castle/outpost is negative, it means that your soldiers are consuming more than you can produce, and in some point later in time they will starve (and you will lose them) if you don't do anything. In this case, you will see also for how many hours/days the amount of food you have can be sufficient for your soldiers. There are few ways to handle negative food consumption.

Here are some suggestions that can prevent your soldiers from starving:

Food is produced by 2 types for buildings: Normal buildings: Farmhouses, Granaries and relic buildings: Greenhouses and Conservatories. Relic food buildings has some advantages over the normal buildings, but you are limited to 4 relic building in total for every castle or outpost (2 x greenhouses and 2 x conservatories). Both provide similar production, but upgrading the greenhouses is much cheaper than the conservatory: A full upgrade of a greenhouses all the way to level 20 will cost you 120 construction tokens & 1,125 upgrade tokens, where a full upgrade of a conservatory will cost 1,875 construction tokens & 9,315 upgrade tokens. For this reason, you should upgrade your 2 x greenhouses first up to level 20, and only then start upgrading the conservatories.

Every castle and outpost has a maximum number of buildings that can produce food at 100% workload. When you build more buildings than this number, their workload will be downgraded (75%, 56%, 42%, 31%, 23%, 17%, 13%, 10%, 7%, 5%, 3% and so on). As one of the major factors for food production is "Public Order" (PO), there should be a balance between the number of food production buildings and decoration items. Usually buildings that give you 5% of workload or less, should be demolished, so you save more space for decoration items to increase your PO, that will also increase the productivity for all higher (workload) buildings.

Here are the 100% workload building for each Kingdom:

Each and every food building follow 4 parameters that determine its total food productivity.
Is is called: "food per hour". Here is an example: 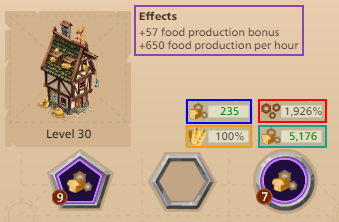 Every outpost has 2 resources that can be produced, primary & secondary. Those consist of food (always) and wood or stone (but there is no wood + stone outpost). Normal outposts have their primary resource with a workload of 6 and the secondary resource with a workload of 2. However, some of the outposts you find on the map, have a "glowing aura" around them. Those are called "shiny outposts" and have a workload of 8 on their primary resource. For novice players that are in early stage for the game, It is highly recommended choosing "shiny outposts" with a food as primary resource. This will give you the ability to have 8 food buildings that has 100% workload. This "early in game" decision will have a huge impact on your later progress in the game.

Another advice for novice players: if you do not find 3 "shiny" outposts near your current location of your main castle in "The Great Empire", don't compromise on normal outposts and consider to re-locate your main castle to a place on the map that has 3 "shiny outposts" (with food as primary resource) nearby (!)

Here are the factors that affect your food production. You have 2 types of effects: permanent (e.g. building, research) that does not change over time and therefore are temporary (e.g. titles, VIP mode, subscription) that might degrade over time or expire, hence needed to be kept active to have their influence.

The Hunting Lodge is a (civil) building that can be build when you reach level 53. It increases the food production, but in parallel decreases the wood and stone production. If you attack many RBC targets & participate in events (e.g. Nomads, samurai, foreign lord) you may easily loot wood & stone from those targets, so it is highly recommended that you adjust your "Hunting Lodge" in all 4 kingdoms for the maximum food production.
Building a "Hunting Lodge" (level 1) will cost you only wood & stone, but further upgrading it (up to the maximum level 3) will cost you rubies. The higher the level, the better ratio between food (increase) and wood & stone (decrease). There are two "flavors" of this building: in "The great Empire" it is called: "Imperial Hunting Lodge" and on other kingdoms it is called: "Campaign Hunting Lodge" (you can not build it on "Storm Islands").  When you build one  (in your main castle in "the Great Empire") the adjusted food production will also reflect all your outposts. The "Campaign Hunting Lodge" has a slight (better) difference in ratio than the "Imperial Hunting Lodge".

When you increase your food storage capacity, you will have more grace time for your soldiers. You can do that in two ways (in parallel):