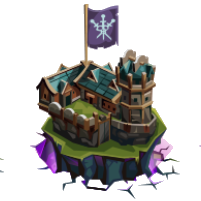 Always attack full (i.e. put army on all 3 flanks (left, center, right) fill all waves you have (4,5,6).
Use "cleaners" only on flanks that have defenders (on empty flanks put full army start from 1st wave).
Always try to spy with 100% accuracy, so you can see EXACTLY the def. formation including the tools used.

foreign lords / Bloodcrow castles has ONLY 1 tool per slot. This means that the defense tools are used only on 1st wave of attack, and in your further waves of attack - there are NO TOOLS LEFT for the defenders (!). Therefore it is possible to use "cleaners" → You put ONE cheap/weak soldier (like spareman) without any tools on your 1st wave of attack. This will clear (or "waste") the defense tools, so on all further waves (2,3,4,5,6) the defenders does not have any tools, so you can use less tools, and also it will minimize your losses during battle. More ever: if you have less than 100 soldiers on a flank that has defenders, sometimes (especially when there is a high ratio of melee defenders and the defense formation is 0-0-100) you might not win this flank only on 2nd wave, so you should use tools on 3rd wave as well (don't worry: in cast that 2nd wave defeated all defenders, tools you put on 3rd wave will not be used, and will return home after battle, so you do not lose them if not used).

"Cleaners" should be used only on flanks that DO HAVE defense soldiers. (on flanks that does not have defense soldiers there is no need for cleaners - you can put your full force in 1st wave, but sometimes the defense formation might change (its very rare), however, if you want to be sure: put tools. In case the formation has not changed, and still no defenders, your tools will not be used and come back after battle. But, In the rare case that the defense formation has changed, attacking without tools will cause high loses.

When you spy a foreign Lord or Bloodcrow castles try to attack within a "reasonable" time frame (10 min. or so) it might CHANGE DEFENSE SETUP after some time. If you in doubt, re-spy just before the attack.
It is also good to spy ALL targets around you, to find the "big" ones. Its recommended to attack those "big" targets when the "glory bonus" is activated, to double your glory.

When using "Cleaners" you may SAVE TOOLS by using the EXACT tools that are needed.
It can be done in two ways (This is a little "tricky" but I will try to explain that in detail):

1. Using the spy report to see which defense tools are in use (remember: only on 1st wave)
2. Using "on screen" data (without spy report) to get to the same results

The "trick" here is to understand that the values (wall, moat, gate, melee, range) that you see on top of the attack screen are the values INCLUDING the tools, but we want to know how strong (well, the opposite: not so strong...) are the defenders without the tools...

How to win the big prices and gain glory

The glory system, allows you to recruit better soldiers. So, as much glory you have is better. The disadvantage is that every day you lose a certain % of your glory, therefore, planning your glory is very important in the game.

Here are the ways you may gain more glory:

.As many defenders there are in your target, the more glory you gain when you defeat those castles. You use banners to gain glory. When using banners, you put them in all flanks, all waves except those you need toools. Do not forget to put them also on 1st wave along with the "cleaner".
A rule of thumb is: Use banners only on "big" castles (that give a "base" relatively high glory value). Banners vary from 1% to 5%. Try not to "waste" high % banners on "small" castles. Here is a tip: use 1% banners on ~1k castles, 2% of 2k castles and so on... save the 5% banners (horse tails) for real big targets, like 4k-8k. Also try to coordinate your attack with other players in your alliance, so "glory bonus" can be activated, hench giving you double glory.