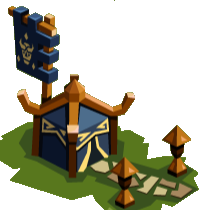 The Samurai Invasion is one of the "rotating" events in the Game.

During this event you attack 4 "samurai camps" located near your main castle. You can attack them without "cooldown" 10 times each (they start at level 80 and go up to level 90). Only when they reach level 90 there is a "standard" 90 minutes "cool time", (This "cooldown" can be boosted in the alliance improvements screen).

When successfully defeated those "samurai camps" you will get (among normal loot: wood, stone & coins) a special samurai currency called: "Samurai tokens"

. Those tokens can be used to purchase rewards it the "Samurai invasion tent".

In addition there is a "sub-event" (similar to the Khan Camp in Nomads) called: "Legion of the Daimyo" - see later.

On every "Samurai camp" you attack, there are soldiers on the 3 flanks, but no soldiers in the courtyard. Therefore, to save tools, the smart attack option is to attack on 1 flank (left or right) and center, using 4 waves of soldiers, and let those soldiers handle the other flank (that you did not attack) in courtyard.

The question here, is how to choose the right or left flank ?

With all those in mind, the simple answer would be:

Another tip for minimize your losses:

Example: If the flank you did not attack has 60 range and 20 melee, you will need in the courtyard triple number of melee than range (to accomplish this, as wave #1 is all range, fill waves 2-4 with melee, so you get a 1:3 ratio).

The "Samurai invasion Tent" will let you exchange your "Samurai tokens" with many valuable things: troops (see later on), tools (there are two defensive tools: "Throwing Nails" & "Karamita Arrowheads" which are very good for your defense in any time, including war), build items, pieces of equipment, fast travel feathers, decoration items, silver pieces, material sacks, fusion forge material and construction/upgrade tokens. Most of these rewards are very useful in the game. There is also an option to buy a very good (90/90) castellan & commander sets (for those you will need a lot of "Samurai tokens" so you will need to save them for later use).

You may save your "Samurai tokens" for later use (even after the event is over) to be able to get better (more costly) rewards. Players which are in level 50 and above, get Silver and Gold pieces (can be used in the "Master Blacksmith" to purchase valuable rewards) and also "Decoration catalyst" (can be used in the "Fusion Forges" to upgrade your decorations).

During the "Samurai Invasion" event you may purchase both attack & defend soldiers from the "Samurai invasion tent".

Samurai attack soldiers are super fast (speed: 50) so they are ideal for "sneaking" attacks during war, for attacks on special kingdom RBC (e.g. "desert fortresses" and  "dragons"), where you compete against other players to hit those targets first, so faster soldiers means great advantage (!). Well, there is one disadvantage with of those soldiers: you need to use rubbles to heal them, so non-ruby players will have to delete their losses after any attack (recently, there is a new option not to put ruby-soldiers in hospital, so you do not need to delete them manually).

Samurai defense soldiers are powerful, but also use rubies to heal.

Legion of the Daimyo

This is a "sub-event" that is active while samurai is. It is for level 70 players only, that play within an alliance. You have 4 "Daimyo Castles" near your main castle in four levels of strength (1-4): 1=weakest - 4=strongest that you need to attack, and 4 "townships" with respective levels (1-4) that you need to defend after you "trigger" an attack from the respective "Daimyo castle". You need to send support (from your main castle or OP) to that "township" you triggered. The defense will instantly be there, so you can support after you "trigger" the attack. There is no need to send tools, you may use tools from your main castle when you setup the defense. What makes the defense more challenging is that the number of defenders that can support a "township" prior the attack are limited (based on the "township" level). Every time the "township" is successfully defended it will "level up" with more troops and better commander. The difficulty level for level 1 is quite high, compared to the highest in "Samurai Invasion", and levels 2,3,4 are much harder (!) For any attack of a "Daimyo Castle" and also defending a "township" there is a cool down time, again: based on the level.

This event will give your alliance "War effort points" that at the end will be awarded.