Attack of the Shapeshifters 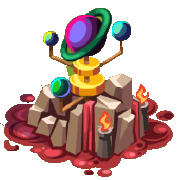 What is the Shapeshifters event ?

Its an event where you have around your castles "totems". Those are replication of real player castles in your server. As you attack a shapeshifter "totem" a duplicated attack is automatically launched against the player that this "totem" is representing. When a real player changes the defense setup of his castle, it will be also "reflected" to the "totem" defense setup. Remember that when you attack a totem, you do not see/know the real player castle that this "totem" represents. Moreover, when you get an incoming attack on your main castle from a "totem" (because another player on the map just launched an attack on the "totem" that represents your main castle) you will not know who this player is.

You may not get support from other players in your alliance when there is an incoming "totem attack". (If other players support you, their troops will not be calculated in battle).

When you attack a "totem" (in "normal mode") you will not lose any troops, nor you lose only the tools you used for the attack (you may however operate a "hardcore mode", read further...)..

When you are defending against a "totem" incoming attack, you will not lose any defenders, nor tools and also if you lost the battle, no building in your castle will be on fire.

When you activate "Hardcore mode", you will gain more points when you attack, but troops will be lost in battle as in any other PvP battle. You will get the points for the battle regardless of winning or loosing (the only thing that matters is the size of the defending army). Therefore, the best practice is to activate all "hardcore mode" options, then attack the targets with the most defenders with the minimum troops possible (32 troops) lose the battle and still get the points (!)

. You win those when you play the event, then you may buy various cool prices (including good commander and a castellan) in the "shapeshifter shop". Btw — The commander and castellan pieces are quite "expensive" (i.e. you need a lot of "charms" or "insignias" for each). Don't worry in a few month you will get enough to buy them (it might take 6-12 month) depending how good you play the event.

When you attack you get the "charms" even if you lose in battle. So here a way to save tools (most of the time you will need ruby tools for attacks, so why waste them?):
1. Activate all options of "hardcore mode" (this will give you a x2.7 multiplier on points you win in the attack.
2. Attack with 32 soldiers only (any type you like, better use cheap soldiers) WITHOUT TOOLS (!)
You will lose the 32 soldiers, but get a lot of points that way.
3. Make 5 attacks like this to preform a "set" and you will get into the "standings table" and start to earn "charms" every time they are calculated.

Add a new comment for Attack of the Shapeshifters