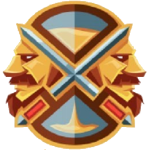 The Outer Realms event is available to level 70 players only. It is a bi-weekly event that rotates with the "Beyond the Horizon" and takes place in a different dedicated server (that is common to all players worldwide from different servers). It is one of the best ways in the game to win construction & upgrade tokens, that will let you upgrade many important buildings. It is not possible to transfer troops, tools & resources to "Outer realms". However, If you purchase rubies during the event, the unused ones will be transferred back to your main castle.

The event has different (rotating) flavors:

Enter methods for the event

With this method, when you enter the event, you will have a level 11 castle with some buildings already built. You then need to select the formation of your castle, as follows:

(*) "Emperor's Palace" is unavailable during the "Masters of Might" 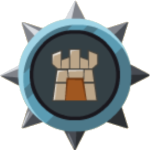 With this method, you copy a "replica" of your main castle to the "Outer Realms" server. All your building & decorations will be copied, but your troops & tools will be not. For this, you will need a "Passage Token" that you can buy for 15 million coins or to win it when you are ranked are at the top 1,000 players in "Kingdom's league". Your entry level will be legendary level 800, and you will start with 100,000 coins & 80,000 food. Note: Your misty castle will be totally independent of your main castle. Any progress you will make in either of them, will not reflect the other.

In all flavors of "Outer Realms" after you have entered the event, you may form a new alliance, or join an existing one. Being a part of an alliance is very important, since you may support each other in case of incoming attacks, have your troops proceeded during your offline time by "support"  another alliance player (or just spend time on travel back & forth),  and also perform other actions as a group.

Near your castle you can find 3 camps:

You get more "heritage points" by attacking other castle lords. On every successful attack you will plunder a portion (usually 10%) of their heritage. After any attack (regardless of its result) your troops & tools will return immediately to your castle (there is no travel waiting time). You may increase the amount of heritage you plunder in an attack by buying "Heritage boosters" with rubies. At the end of every day of the event, the leaderboard will update with the ranking, based on the heritage that was collected by all players.

Recruit Maceman &  Crossbowman. They are cheap and fast to recruit and travel very fast (speed: 75). With those, you can have fast attacks on level 11 players (or others players, with a lower level than yourself) near your castle. Chances that they can defend are minimal. You may use those to attack RBC in levels 1-7 (at higher levels, you will need stronger attackers).

The difficult part of the event is to keep your heritage from being plundered by other castle lords.
Here are the basic guidelines & facts:

All this leads to a very simple conclusion:

The best way to progress is to follow the "quest book" to level up your castle, get rewards during the process.  (or players that are lower level from yourself). The "rule of thumb" is to gain more "Heritage points" than you lose. This will  keep you in good position on the leaderboard at the end of each day.

Attack RBC near you to get coins, resources and equipment pieces. Build your commanders with those pieces that have high melee/range power. This will allow you to further attack higher level RBC & players near you and loot more coins & recources. At a certain point, during day 4-5 of the event, you should have enough coins (65,000) to purchase a 90/90 commander ("Legacy of the Goat Cult") from "The equipment trader". As higher the RBC near you, the more coins you can tool when attacking them. You might later have enough coins for your 2nd 90/90 commander. Next step, when you have both is to go for the 90/90 castellan ("Heritage of the North") for 80,000 coins.

In this type of event, attacks can loot food & resources. In order to maintain your rank and prevent being looted by low and medium level players (you will not be able to defend against "ruby players" since they will have strong commander & attackers) you should have a reasonable amount of defenders. Those can be bought with coins at "The Armorer".

As all distances are set to 25 regardless of the actual place on the map, you should choose players that are a little higher rank than yourself, and attack them with a small amount of attackers (usually 50 are enough). A good strategy is to launch your attacks approx. 1 hour before the daily rank table calculation, so they hit just before that time, and you can then maintain your place in the ranking leaderboard. 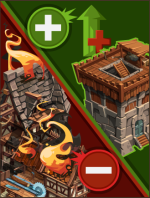 In this flavor of event, you will get both veterans attackers and  construction & upgrade tokens if your rank is up to 10,000. Other ranks up to 50,000 will only get veterans attackers (bot not tokens). If you need those super strong attackers, you might want to join the event with minimal activity just to finish within the 50,000.

If you are a ruby player, you will be able to get to a good rank and win the rewards easily. Here are some tips that will help you make the most of your ruby purchase:

Armorer sells soldiers and tools that are a bit cheaper than in your regular server.

All soldiers and tools have a maximum limit of 500.

Traveling merchant sells resources that allows you to upgrade your buildings.

All items are sold for rubies only.

Each of the sets can be bought only twice per event.