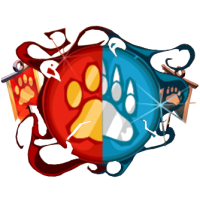 The Berimond invasion is an event that takes place in "The Great Empire" (don't confuse this event with the "The Battle for Berimond" which is a different event). Usually it occurs simultaneously with the "Nomad Invasion", but not always (this event appears approximately once a month). It will allow you to collect "Gallantry points" which will give you some good bonuses.

During the event, you can see 10 "Berimond Camps" (5 red & 5 blue) near your main castle. Those camps have a different (random) level. When you attack those camps you gain 2 type of points:

Are similar to "Glory points". As more "Gallantry points" you gain, a higher "Gallantry Title" with more (and better) bonuses you get. However, every day you lose a portion of your "Gallantry points", so in order to keep them high it is recommended that you also participate in "The Battle for Berimond" event.

Berimond camps have defenders on all 3 flanks, but no defenders in the courtyard. This makes the possibility to attack center and one flank with 4 waves, and have a big advantage on the courtyard. Thry does not have a cool down time (like RBCs). This means that a few seconds after you hit to a camp, another (random) camp will show at the same location, with a slightly different defense formation. This makes the possibility to have two types of attacks:

This is more precise method but also slower. Spy the camps before you launch your attack. As said before, you can attack the center and one flank only (left or right). This attack method will save you tools, and it is therefore the recommended one for careful players. Choose the flank with the highest number of range defenders. In case the 2 flanks has a similar number of range soldiers, choose the one with the least melee power. In case they are similar with that too, choose the flank with the least range soldiers power. Fill attackers on all 4 waves (center and the flank you have chosen only) to have an easy fight on the courtyard.

This is a more fast & relaxed method, and it meant for players that has a 90/90 commander with good wall/gate and also has a lot of troops & event (or ruby) tools. Also for those that do not care loosing a little more soldiers on the event, but are targeted for a very high score. In this method you do not spy any camp, but instead you set up one attack formation that will cover all possible camps layouts, save it as a template that will be used later on (in a fast pace), as follows:

When this template is ready, you start attacking camps. Since there the "cool down" is usually 20-30 seconds, you may launch your attacks on camps in a "train mode": meaning that you launch every 1 minute an attack. Keep in mind that for this you will need 10-15k attackers in your main castle & outposts.

If your commander is strong enough, tools will be needed only on the 1st wave, so there is no need for tools on waves 2-4. All camps have a 19% melee/range castellan with 0-2 "bodkin arrowheads"  (+50% range power), so if you are short on ruby/event tools, you may mostly use wooden tools in this event (except when a flank you choose to attack has 2 "bodkin arrowheads"). The following table can help you understand how this is calculated (you will have also iron & event mantles):