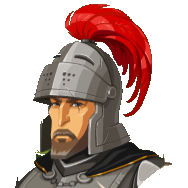 Attacks are the the most important part of the game. Whether its an attack for burdening another player, loot a NPC, or participate in an event, all attacks are similar. When you understand how to setup a successful attack, it will lead you all the way in the game from early stages until you become a pro..There are 2 basic things to understand about attacks:
1. Each target you attack has 3 flanks for defense (left, middle and right) where the defender put his defenders and also defense tools (that increase his defense power for "wall", "moat", "range" and "melee". The middle flank only has also power for "gate". There is also a "courtyard" where the rest of the defenders that did not "fit" into the wall stay and wait for the last phase of the battle.
When you attack you put attackers and attack tools (that reduce or negate the defense power) of those 3 flanks: left, middle and right. You have 4-6 waves of attack, depending your level in the game. Each wave of attack is calculated separately: Winning attackers move to the courtyard, winning defenders move to the next wave. The last phase of the battle is the "courtyard" in case some attackers won 1 flank (or more).
2. There are two types of troops for you and the defender: melee and range. range defenders are weak against melee attackers, melee defenders are weak against ranged attackers, As you may use attack tools to negate the power of range defenders (but there are not any tools to negate the power of melee defenders) the first rule of attacking is to attack with range soldiers and use "attack tools" to completely reduce the range defenders. When you do that, the melee defenders are the only defenders on the wall that can defend (range defenders are practically does not exist since you negate them) and since, as said before they are weak against range attacker, your chances are much higher to win the wall.

This comes into place only when you attack a NPC target and don't have enough space on the flank to completely negate all of the following. In this case, you should use the tools is the following priority:
1. Ranged reduction (mantles, shield walls, cast iron mantles and others).
2. Wall reduction ((scaling ladders, siege towers, breaching towers and others).
3. Gate reduction — middle flank only (battering rams, iron rams, heavy rams and others).
Tools usage against PvP target

When attacking a another player, rules are different. As the defender might change the setup, after that attack was launched, what you have seen in spy report, might not be the defense formation. In this case you should attack in a versatile way, that might "break" any defense setup. One of the common setups of a versatile attack is to put range soldiers (with range/wall tools) on waves 1,2 and melee soldiers (with wall/moat tools) on waves 3,4. if you have 5 or 6 waves of attack, fill them also with soldiers and tools. This formation might win a wall also in a 0-0-100 setup defense (which is the headrest to win).

The last phase of any battle is the courtyard (called also "the keep"). This is the most important phase, since the number of solders that defend the wall are limited (depending on the castellan, "the keep" build item and ;"hall of legends") but soldiers in courtyard and not limited and can be high when other players in the defender's alliance support him.
The result of the battle is determent according the total power of attackers/defenders, the commander/castellan "courtyard power bonus" and the courtyard bonus.
There are 4 possibilities:
1. The defender hold all 3 flanks — He wins.
2. The defender hold 2 flanks (and loose 1 flank) — Defender get a 30% bonus on courtyard.
3. The defender hold 1 flank (and loose 2 flanks) — No courtyard bonus for both sides. (0% bonus).
4.  The defender looses all 3 flanks — Attacker get a 30% bonus on courtyard.

Attacking targets with no soldiers in courtyard

In some events (Samurai, Nomads, some RBC castles) your targets does not have soldiers (or have very few) in courtyard. In this case, the best strategy is to attack only 2 flanks out of 3, and let the soldiers that win the 2 wall flanks fight against the soldiers on the 3rd defense flank (which you did not attack) at courtyard. If your commander has some "courtyard bonus" it might help winning the battle with minimal looses and also save you tools.
How to choose  the best 2 flanks to attack ?
1. Choose the 2 flanks that have the majority of range soldiers, since you may negate their power with mantles, shield walls, cast iron mantles and others (remember: you can not negate melee soldiers power).
2. Leave the flank with majority of melee soldiers to fight in courtyard.
3. Use tools on 1st (and if your commander is not too strong, also in 2nd wave).
4. Fill all your possible waves 1-4 on the same flanks that you choose to attack. (Don't put soldiers on the 3rd flank that you choose not to attack) so you will have enough soldiers in the courtyard to fight with the 3rd (non-attacked) flank.
5. If you have 2 flanks with the same ratio of range/melee (or a close one) — You should choose the one that have the least melee power. Take a look at the following example:

The left/right flanks has similar ratio of range/melee, also both has 119% range power (using 24 wooden mantles will negate them totally) but left flank has 120% melee power, while the right flank has 219% melee power. In this case, the best strategy is to attack on LEFT & CENTER (!)
6. Since the battle will be concluded in the courtyard, you should check the formation of the soldiers on the flank that you do not attack. Use a range/melee ratio (in total of your attack including all waves) opposite to what you see there. i.e. if you see 50 ranged and 100 melee, have x2 ranged soldiers in total than melee, if you see only melee, attack with range only.
7. This strategy is not recommended if you choose to use "cleaners" since you will not have enough soldiers in courtyard to have an easy win of the battle.